The Internet of Things (IoT) sits at the heart of a major technology-driven transformation in Australian agriculture that has huge implications across the whole $60 billion industry.

It's the boon of a move into "precision agriculture", an approach to farming and livestock production that embraces technologies that grant complete control over the process.

With IoT, farmers can monitor and manage every tiny detail — from the moisture, nutrient and acidity contents of soil and individual plants to the presence of pests and local weather patterns to the health and wellbeing and minute-to-minute movements of cattle.

And as these elements become connected, farmers stand to gain huge insights from big data analytics that enable better decisions both on the farm and at every stage along the supply chain — a move that should ensure the agriculture industry can feed the world's projected 8.6 billion people by 2030 and 9.8 billion by 2050. 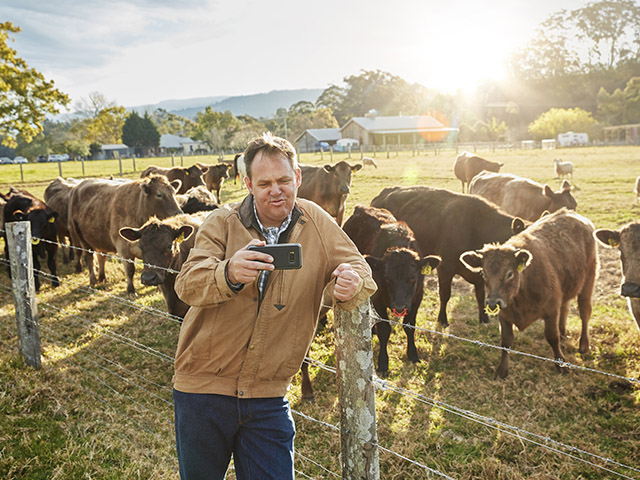 It can be a time-intensive task to manually track and monitor hundreds or thousands of farm animals such as cows or sheep, which are sometimes spread across vast areas, but a multitude of IoT technologies make light work of this.

GPS and RFID sensors attached to the animals, coupled with drone or ground-based high-precision geo-mapping tools and sensors on water bores and troughs enable livestock management that simultaneously looks at the state of the herd as well as each individual animal — thereby negating the need for farmers to make constant trips to check on things in person.

Sensors can detect, for instance, when an animal is sick or about to give birth and alert the farmer via a text message or app notification. Predictive data analytics can even identify notable changes in an animal's condition before they present any obvious symptoms.

Motion sensor data on cow movement revealed that the animals get restless at night when they are fertile. Farmers were able to use this information to increase the productivity of cows by around 20 percent.

Around 450,000 cattle die prematurely in herds across Australia each year — amounting to around 7 percent of cows in the country, or more than $700 million in lost revenue. But this data helps to identify the causes of illness, and to reduce spread of disease within a herd, so that those premature death numbers can head as close to zero as possible.

IoT gives farmers unprecedented control over the use of resources in agricultural production. Sensors embedded in soil can take daily measurements and drive pumps to automatically deliver precise quantities of nitrogen, water, fertiliser and other nutrient inputs to maximise growth and minimise waste. This translates to more than just better efficiency and profits; by using only the resources needed, a farmer can reduce the impact of agriculture on the environment and even outcompete larger, less technology-centric farms.

Meanwhile, low-cost cameras can measure light and gather images that show growth over a prolonged period of time, with this data analysed by computer vision algorithms to automatically detect disease or to alert farmers when they need to prune or harvest. Predictive weather modelling and big data analytics may also help farmers make smarter decisions about when (or what) to plant and harvest, and it could lead to better irrigation and pesticide systems that cater to seasonal variations.

And drones and other autonomous vehicles can be deployed to assess crop growth, map and survey agricultural land, harvest fruit and spray weeds, amongst other things.

Agriculture has become a global business. Farmers no longer produce food and other goods only for the domestic market; they now export to China and the United States and other places all around the world.

And it's technology like that developed by Smart Paddock, or by FKG Group's Queensland-based innovation precinct for farming, that allows Australian produce to compete on the global stage — with fast, evidence-based decisions that have a significant impact both on short-term yields and long-term productivity.