At Telstra, we want everyone to have up-to-date and relevant information about using mobile phones. This includes all matters of mobile phone safety.

View our Mobiles and Health video including exposure reduction options

What do we know?

Telstra relies on the expert advice of a number of national and international health authorities, including the World Health Organisation (WHO) for overall assessments relating to health and safety. Research into electromagnetic energy (EME), mobile phones and health has been going on for many years. In October 2014, the WHO updated its fact sheet on mobile phones and health and reaffirmed its current position. The Fact Sheet says:

Q: “Are there any health effects?

A large number of studies have been performed over the last two decades to assess whether mobile phones pose a potential health risk. To date, no adverse health effects have been established as being caused by mobile phone use.”

The WHO also lists the following key facts on mobile phones and health:

Mobile phone use is ubiquitous with an estimated 6.9 billion subscriptions globally.

The electromagnetic fields produced by mobile phones are classified by the International Agency for Research on Cancer as possibly carcinogenic to humans.

WHO will conduct a formal risk assessment of all studied health outcomes from radiofrequency fields exposure by 2016.

In terms of brain tumours and long term effects the WHO says:

Q: What research is the WHO advice based on?

The WHO provides information on how to reduce mobile phone exposure:

"In addition to using 'hands-free' devices, which keep mobile phones away from the head and body during phone calls, exposure is also reduced by limiting the number and length of calls. Using the phone in areas of good reception also decreases exposure as it allows the phone to transmit at reduced power."

At Telstra we are committed to providing you with any further updates from the WHO as they become available.

Telstra takes all matters of safety very seriously and only sells mobile phones that meet national and international safety requirements and standards.

There are many sources of information on mobile phones and health. As well as our web site, you can go directly to some of the authorities and organisations we rely on for expert advice or general information:

You can also check your device manufacturer's handbook, guide or web site.

Or email us at eme.enquiries@team.telstra.com

In Australia, the EME safety standard for mobile phones is set by Australian Radiation Protection and Nuclear Safety Agency (ARPANSA), and regulated by the Australian Communications and Media Authority (ACMA) - the Federal Government regulator for the telecommunications industry.

This is the standard recommended by the World Health Organization (WHO). It is based on guidelines from the International Commission for Non-Ionizing Radiation Protection (ICNIRP), and a careful analysis of all of the scientific literature (both thermal and non-thermal effects). It is designed to offer protection against identified health effects of EME with a large in-built safety margin.

Since 1999, all mobile phones and devices sold in Australia must display the Federal Government compliance sticker known as the Regulatory Compliance Mark (RCM) to show that they comply with the EME safety standard. Prior to 2014 the RCM was known as the A-Tick compliance sticker. Mobile phones bought in Australia prior to 1999 were still made in accordance with the EME safety standard but were not required to bear the sticker.

People should make sure when buying a new mobile phone that it bears the Federal Government RCM compliance sticker, usually found behind the battery or on the box or packaging. 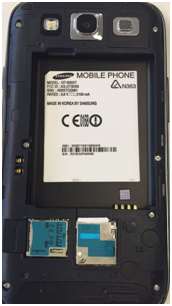 The "RCM or A-Tick" is the triangle on the top left hand side of the at the top of the white bar code sticker with a black tick inside.

From October 2001, mobile phone manufacturers began providing SAR values and SAR information with all new release mobile phone models. This followed the development of a methodology to test mobile phones for their SAR level, introduced by the European Committee for Electrotechnical Standardisation (CENELEC), which allows for consistent reporting of SAR values worldwide.

The maximum stated SAR level of a mobile phone is a maximum. This level does not represent an accurate indication of every day exposure because operational power levels vary considerably during normal use.

The variations in the maximum SAR measurements between the different models of mobile phones should not be seen as a measure of differences in safety. Although mobile phones sold in Australia may vary slightly in their measured exposure levels at maximum power output, they are regarded as equally safe because they all comply with the EME safety standard.

There are many ways to find SAR information for mobile phones. We have listed some easy tips below.

While the maximum SAR values provide an indication of the highest power level that a mobile phone is capable of, mobile phones are designed to operate at the minimum power necessary to connect and maintain a quality call, and so they regularly operate at levels well below the maximum SAR.

In fact, both mobile phones and mobile base stations are designed to operate at the lowest possible power. The minimum power level required depends on a variety of factors, such as, the specific network, the user's proximity to base stations and the radio frequency band being used.

Once a call has been established, the base station and the mobile handset reduce their power automatically to the lowest level required to maintain a signal connection. This is referred to as adaptive power control.

Give feedback on this page

Did you find what you need on our website?

Thanks for your feedback.

Thanks for your feedback. We will use it to continually improve our website.

If you require urgent resolution, we can help right now.

Thank you for your feedback